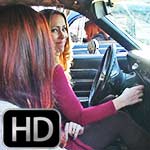 The video continues going back and forth between both cars. Scarlet ends up swapping with Cassandra and after some more trying, they get out of the Coronet and eventually convince Vivian to give up her struggle.