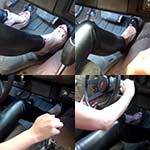 Cassandra & Tinsley Playing Around in the Z/28

Tinsley is filming as they both walk out to the Camaro. It’s finally stopped raining, so they plan to drive the Camaro over to park it for the day. Cassandra is behind the wheel first and gets it started after some slight struggling, backs out into the road and takes off. Can’t drive too fast on the slick roads so she makes up for it by revving the car in neutral some. She’s wearing a black leather outfit with light pink wedges. She drives for a bit before pulling over and swapping seats (and the camera) with Tinsley. Tinsley is a much more cautious driver but she also revs in neutral a bit to make up for not wanting to crash and die. She’s wearing leather pants and shiny patent pumps.

One thought on “Cassandra & Tinsley Playing Around in the Z/28”