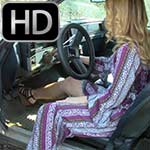 Vivian is leaning against the Volvo waiting for Cassandra to come out. They greet each other with a ‘Good Morning!’ and Cassandra tells Vivian they’re going to take the Monte Carlo so the Volvo needs to be moved. Vivian hops in the Volvo, fires it right up with some quick pumping and backs it up out of the way. While Vivian is moving the Volvo, Cassandra is working on getting the Monte Carlo fired up in black and tan wedge sandals. It takes some work but it finally fires up and Cassandra moves it so Vivian can park the Volvo in that same spot.
She punches the gas because there ain’t no Drivin Miss Daisy today! They chat as she zooms around and all is well until they hit a stop sign and the Monte chugs out on them. It takes a bit before she can get it unflooded to run again.

One thought on “Cassandra & Vivian Carpooling in the Monte Carlo”