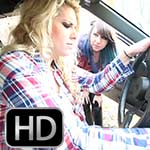 They’re not having a good day with this little car. Cherry’s dad just bought it and it runs like crap…when it runs, which it’s not wanting to run today! Cherry gets frustrated with the thing as Dakota tries helping her out standing next to the car with the drivers door open. Cherry stomps the pedal in her Converse but it’s not helping. After a while, they swap and Dakota gets behind the wheel while Cherry goes around and sits in the passenger seat. Dakota uses the calm, gentle method of cranking the car and it works! A shot of the exhaust pipe as it’s spitting out some thick fog/smoke during the first few revs confirms that it was pretty damn flooded!