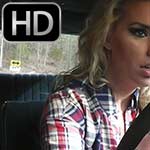 Couldn’t really come up with another way to describe this video than ‘obnoxious’. I don’t know if any of you have ever had one of those passengers that acts like you’re about to plow into a wall head-on at 5 bazillion mph when you’re really just going over a small speed-bump slightly too fast. But if you have then you understand. I apologize for the screaming antics from Dakota…this wasn’t how this video was supposed to go but Cherry Morgan does a nice job of handling the passenger and the car on this struggle-fest drive.
Driving, stalling, cranking and yes, screaming from a passenger. She’s wearing a plaid button-up shirt, faux leather leggings and Converse sneakers.
**Please watch with headphones or with low volume…sorry! 🙁

One thought on “Cherry & Dakota in “The Fucking Obnoxious Passenger””