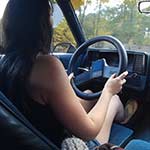 They’re heading out in their platform flip-flops and are taking the troublesome Monte Carlo. Dakota starts out first. She’s wearing the yellow pair of flip flops as she cranks, stalls, drives and even has some help from Cherry at one point, with Cherry turning the key and Dakota pumping the gas pedal.