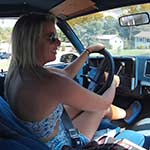 Dakota is driving still for the first part of this clip. She pulls over because Cherry wants to drive. The girls swap over each other and I’m sure if someone was looking right about now, they’d wonder what these two girls were doing to each other! They finally get situated and the car stopped running sometime during their swap. Cherry cranks it in her blue platform flip flops until it starts and she goes…not far. It stalls at the next stop sign. She gets is restarted and manages to make it home but it does stall as she’s turning into the driveway.