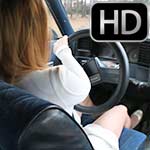 I’m filming from the back while she drives down these curvy country roads. She’s wearing our short little dress and gold glitter stiletto pumps. She’s got one hand on the wheel, the throttle cracked open good and I’m doing my best to keep from being thrown around.

One thought on “Cheyenne Malone Driving the Monte in Gold Pumps”