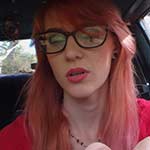 Crystal gets into the car, ready to do some revving but she’s having trouble getting the car to crank. She’s giving it a lot of gas, that’s how Cassandra told her to get it started but it’s not working. After some good attempts, she gives Cassandra a call to find out what the deal is. She is instructed to pump it a lot and to pump it fast, so Crystal complies but isn’t so sure it’s going to work. She gets off the phone to focus on starting the car with the advice Cassandra gave and after another few minutes of unsuccessfully getting it cranked, Crystal calls Cassandra again. During this conversation, Crystal finds out her car has been deliberately sabotaged and the ‘advice’ she was given was to make the car even harder to start so that you could have a pedal pumping show. After getting over her shock, Crystal looks at you and talks about how you like watching her pumping the pedal..when she’s fucking pumping it…pumping it and pumping it… 😉