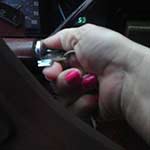 We kick off this series with Cassandra’s first series of curator clips.  She’s starting up all the different cars in different footwear.  Unscripted and raw! 🙂  Tell Cassandra what you think by commenting on this clip! 🙂