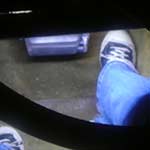 Another entry from our lovely curator.  Day or night, rain or shine, it has to be done.  Follow along and let Cassandra know your thoughts on this clip and series by commenting!