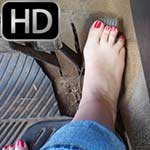 “Today wasn’t too bad.  The Coronet started up easy but the Bus had some battery connection issues.  Took 2 or 3 times to get a good connection.  Need maintenance to check it out when they can.  The Volvo & Camaro behaved nicely, didn’t take too much pumping to get them going.  Warmed them up pretty good as well as the BMW 2002…I was barefoot in those.  Was nice to rub my bare soles over the pedals, feels good!!
Lastly, I decided to bust out my sexy leopard print boots for another warmup session with the Volvo!  I LOVE these boots…move over catwoman!! 😉 ”
-Curator Cassandra