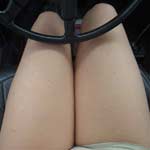 “Wasn’t too bad of a week.  The cars seemed to mostly behave when I went out to warm them up.  I got to do some fun revving in my new leopard print boots when I was warming up the Coronet!!  That was fun.  I had the most trouble with the Jeep.  I had some cute open toed sandals on but apparently the battery was weak and in just a few attempts, I killed it. 🙁  I need maintenance to come check it out…again! I also got in some nighttime driving in the old Bug.  I’m a little rusty but I didn’t strand us from stalling it out and flooding it…at least, not this time.”
-Curator Cassandra