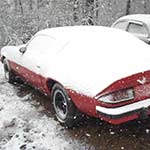 “It’s snowing…in Alabama..and they still want me to see if the cars work?!  Uuuggghh!!  Fine but I’m keeping my pajamas on for this.  Time to go freeze!”