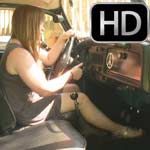 Man, was it a hot summer day when this little cutie had some car trouble.  She didn’t even get to leave the driveway to get some airflow and cool off!  Cold & hot starts are looong and challenging in this old VW.

2 thoughts on “Daisy Cranking the Bug in Gold Thong Sandals”