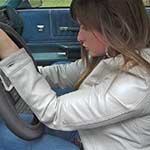 She’s got the old Monte Carlo flooded bad!! It’s sputtering, coughing and wheezing throughout this whole clip. She doesn’t give up but ultimately loses this battle when the battery goes completely flat! Various angles as she cranks away in her leather jacket, blue sequin top, big belt buckle, tight jeans and shiny brown cowgirl boots.