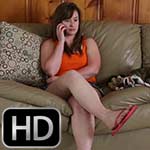 She’s sitting on the couch slapping her flip flops against the sole of her foot when she gets a call. It’s a friend that invited her to come over. She’s excited to see this friend since it’s been a while. She grabs the keys to the 1974 Dodge Coronet and heads out the door. When she gets in, she gives the car a little pep talk to start for her and after some tries, it does…yay! She pulls out on the road and punches the gas! She drives the big car with some spirit on these twisty country roads and before long, she arrives at her friends house. She thanks the car for working for her and gets out.