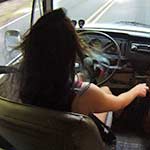 Dakota drives the Westfalia Bus this whole video in a pair of flip flops with her BFF riding shotgun. They’re following me since they don’t know where we’re going. The first part of the clip is Dakota getting the Bus turned around. Her and Cherry talk back and forth as Dakota gets it turned around. From there, it’s all road till we reach our destination. Dakota drives the shit out of the Bus, taking the rpm’s way up before shifting and keeping them high while driving. She stays in third gear most of the time so that you can hear the engine. She revs it some in neutral while Cherry just sits there and looks pretty the whole trip. When they arrive at our destination, Dakota revs the Bus for a bit before turning it off.