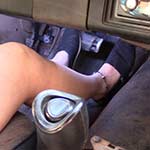 Dakota is taking her and Cherry for a spin in the old ’77 Camaro Z28. She’s wearing an old pair of black, well-worn Toms loafers. They are running solo on this trip, so it’s about as natural and realistic as it gets. The glee Dakota gets when she realizes the Camaro actually has some ‘umpf’ behind it when you get the gas. More-so than the other cars she’s played in of ours.