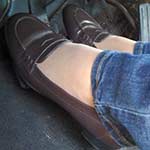 Damara has information that could ruin her opposing client chances for early parole and he decides he needs her out of the way. He hires someone to tamper with her brakes. Damara is on the phone talking about what she knows and is on her way with the information. She gets in her car and drives off leaving puddles of fluid behind. As she drives her brakes become less and less responsive until finally going out completely….no brakes!!!!