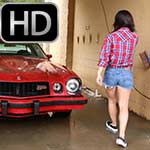 This was a custom we filmed this past weekend while Damara was here.  She’s washing the Camaro because it has been sitting a bit under the trees and has gotten dirty.  She’s finishing up with the rinse as her time runs out on the pressure washer.  Once it cuts off, she heads over to wipe off the drivers side window before getting in the car and starting it up.  Except, the doesn’t seem to want to start up…maybe some water in the carb?  It sputters a bit and she finally gets it going.  Now that it’s running, she hops out to wipe off the back windows but it dies almost as soon as she takes her foot off the gas.  When she gets back in, the damn thing won’t start again…grr!!

One Response to Damara Cranking the Camaro – #545