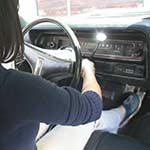 Damara loves her Swedish clogs!  She opens the door and slips on her blue clogs and walks to the Coronet.  She’s gonna try to get it started with a fresh battery but not much luck.  She ends up draining the battery without so much as a sputter from the old land barge.  Sooo she heads over to the Jeep to give it a whirl and has the same luck with it…which is no luck. 🙁