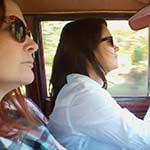 We’re all piled in the front seat of the Jeep and leaving HQ to go get the Volvo. Damara killed the Volvo at the location we were filming a custom video earlier. Damara is trying to get the Jeep started wearing a button down blouse, shorts and shiny black thong sandals. I guess breaking one vehicle wasn’t enough. She loves to flood those engines but Scarlet tells her not to flood it and thankfully Damara listens and gets it fired up!
When we get to the Volvo, Scarlet hops out and tries to get the Volvo going since Damara is the one who broke it. Scarlet is wearing her plaid button down, jeans and black cowgirl boots. Scarlet tries for a bit but nope, it’s not starting at all! So she gets back in the Jeep and we head back to HQ…unless Damara kills us first. lol

One thought on “Damara Driving the Jeep & Scarlet Cranking the Volvo”