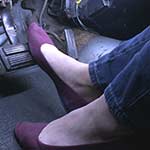 Uh-oh, looks like Dirty Diana has made an enemy who wants her gone…