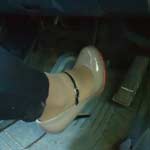 The Scenario:
” Diana knows to much so someone cuts her brakes. She goes out to her car, drives off, leaving puddle, brakes get worse while driving and eventually fail completely. Diana pumps the brakes but they are completely gone. After ALOT of brake pumping she finally gets the car stopped. She gets out to see fluid leaking and gets back in her car, calls for help explaining her situation, pumping the brake pedal the entire time.”