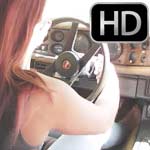 The Scenario:
“Diana is heading to the car, shoes in hand. She hops in and sets her shoes (on the floor or passanger seat).She wants to leave quickly, but soon realizes that it won’t be that easy. After a few tries, she pauses to put her shoes on.Then once again, Diana struggles with the car and tries to coax it to start. She figures that she flooded it.  Diana eventually realizes that she’s not going anywhere and gives up.”