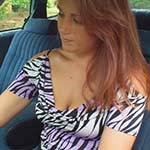 She’s in a hurry and scurries around the front of the Monte Carlo to get in and get the car started. She leaves her left foot on the ground with the door open and quickly tries to get the car cranked. She doesn’t pump the gas the first time she tries to start the car. When it doesn’t fire up, she slowly gives it a few pumps while cranking it the second time. The car isn’t starting and it’s only making her more and more anxious. She pumps it the same way, slowly for another try or two and the car still won’t start! She starts pumping more and more frantically as each try passes with an unsuccessful start of the engine. Her heel pops out of her ballet flats and the shoe slaps against her feet when she gets to pumping faster.
She’s been trying for a while now and the camera is on the passenger side viewing her full body as she keeps trying to start the car. She presses the gas pedal to the floor so hard that her butt raises up out of the seat. She does this a few times throughout the rest of the video until she kills the battery and has to find another way to leave.