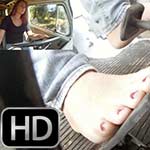 Her sexy size 10 bare feet puts the pedal to the metal on these backroads!  An up-close-and-personal view of her sexy toes and tanned feet paired with a PiP view of her from the dash makes this video exciting as she drives the big Bus.

One Response to Dirty Diana Driving the Bus – #336