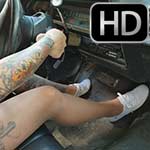 **This clip was originally posted December of 2019 but I didn’t add it to Diana’s model page, so some folks might of missed it.**

These are some of the scenes before, during and after filming a custom video (#901, yet to be posted to store). She gets the car started after some tries (good cranking scene) and drives to where we’re going to do the custom. There are a few takes that didn’t go in the video of her talking to ‘Little Billy’ and slamming on the brakes to avoid hitting an animal in the road. She slams the brakes with both feet and that pedal goes way down to the floor.
We’re doing some chatting throughout the video, either talking about the custom or bullshitting about other things. Her itty-bitty shorts showoff the seams of her sheer hose throughout the entire video.