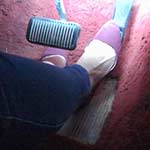 She’s got the camera and is filming herself as she drives back to PTP HQ in the Jeep and wearing purple ballet flats.