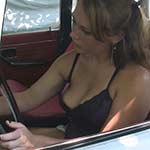 Diana walks to the car barefoot, gets in and begins the process of starting the Volvo.  It takes her a few minutes to get it started and then she backs up and hits the road.  She drives us around a bit, working the pedals in with her bare feet and legs.  She gets a feel for the old wagon pretty quick and doesn’t have much of a problem driving it.  One vehicle down, 7 more to conquer.  >:)