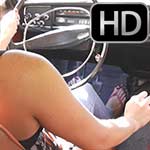 Poor Diana has a hell of a time in the Volvo in this custom clip.  First, it doesn’t want to start and when it does finally start, she almost can’t make it out of the driveway before the car conks out.  Just when things start going smoothly, the car stalls on her as she’s driving…multiple times!  She has to do the heel-to-to method (the REAL way you do it) at one point.  She just wants to make it back home, screw this driving around crap!!