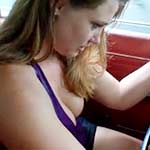 Dirty Diana Rough Ride in the Rain with the Volvo, 3 of 3

So she’s driving and all is going well until she takes a sharp turn and the motor dies.  She pulls off the road and begins another struggle at refiring the Volvo’s engine.  Now the rain starts to come down and makes her struggle even worse.  But for you, it’s a glorious view!! 🙂  She gets it going again and what better time to discover your windshield wipers don’t work than when you’re miles from home in the pouring rain!

One thought on “Dirty Diana Rough Ride in the Rain with the Volvo, 3 of 3”