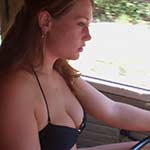 It’s one of those hot southern summer days and to cool off, Diana has slipped on a slinky bikini.  She’s taking you for a ride in the old 71 VW Bus…if she can get it started.  It takes her a few minutes to get the car going.  You can hear that squeaky gas pedal each time she pumps the gas. Once running, she backs the Bus out of it’s spot and gives it a nice workout while cooling her off.  This girl could be sitting in a golf cart and make it look sexy…enjoy!

2 thoughts on “Dirty Diana Driving the Bus in Bikini & Stilettos”