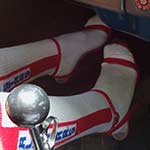 The hood of the Bug is open so that Dirty Diana can put her gear in the car.  She slams the hood shut and you see that she slipped on some sexy sports gear for your little outing today!  She walks to the drivers door, slips behind the wheel and asks, “Are you ready to go for a ride?”
Umm, hell yeah!!  You jump in the car and she begins the process of getting it cranked!  Pump the gas, spin it over, pump it some more….rinse, repeat until success or a dead battery.  Fortunately, she gets it started and after some stalling while backing up, she pulls out on to the road and hits the gas!  She works the pedal in her tall socks and thin-strap stiletto sandals.

At one point during the drive, the car stalls out and she starts cranking the car while it’s coasting.  Fortunately it’s a back-road and she can bring the car to a stop and keep trying to get it going again.