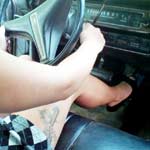 She’s up for giving you a little pedal pumping show in the old Coronet.  She’s not sure why you like her to try and start your old cars but, whatever, she’s game.  She first asks if you like what she’s wearing and then you get in the back seat while she slides behind the steering wheel.  You watch her tanned, toned legs pump the gas pedal a lot.  She gets the car started pretty quickly and after revving it a bit, she looks at you and turns it off.  She wants to make it a bit harder this next go-around.   So she pumps the gas pedal to flood the engine and tries starting it…uh-oh, it won’t start!