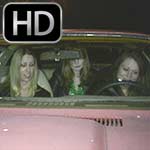 The girls are dressed up and ready to go out for the night.  They’re going to take the Camaro and apparently Scarlet assumed she was going to drive but Dirty Diana races them to the drivers side door and begs to be the one to drive.  Cassandra reminds her that last time Diana drove, she flooded it really bad and stranded them.  But since neither Cassandra or Scarlet have their license, Diana gets her wish and gets to drive!  However, she has problems getting out of the driveway as she has once again flooded the engine!