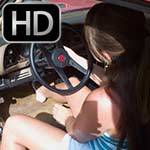 She wants to go get some grub and asks if you want to come along.  She opens the drivers door of the car and lets you want her get it started.  The only problem is the battery in the Camaro is dead.  It clicks as she turns the key a few times and habitually pumps the gas.  A few moments later, she’s coming back to the drivers seat after changing the battery and gets a response from the motor when she turns the key this time.  She pumps the gas while spinning the engine over….and over….and over…and finally gets it to sputter and fire up!  She then does some good revving to clear it out before ya’ll leave for food!

*Sorry for some of the shaky footage, I was trying to balance on a little ledge while trying to get my shadow out of the video.*