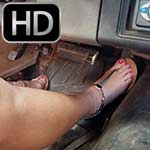 A quickie clip of Diana cranking the old Camaro and revving it up to clear it out after killing the battery.