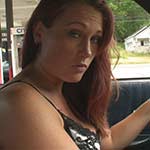 You want Diana to drive you today and you know she’ll drive your car with her bare feet, so you’re going to get a nice show today! It takes her a while to get it cranked since she has to ask you some questions on exactly how to start it but now that it’s running, she revs it up to clear it out and warm the engine up a bit.
When she gets on the road, she notices you’re almost out of gas and asks if she should stop and get gas. You just want her to floor it but she’s worried you’re too low on gas. You persist and she finally starts flooring the pedal, spreading those toes across the gas pedal when she pushes it to the floor! She drives like until she finds a gas station to finally get gas. She gets back in the car after getting gas, has some trouble getting it started again but it fires up and now she can drive wherever, however you want…