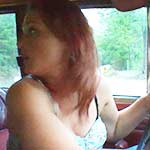 Hitting the back-roads in the Jeep, Dirty Diana puts the pedal down and makes that old motor work!  She’s trying to beat the rain and things are going well until the Jeep cuts out while she’s driving.  She pops it into ‘Neutral’ and cranks it while the vehicle is rolling….slower and slower.  She gets it started just as it’s coming to a stop and takes off again only to have it stall out again as she’s coming to a stop sign.  She’s all over that gas pedal, trying to hurry…