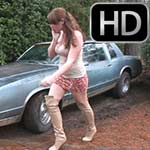 Blegh, it’s a nasty day! Diana carefully walks down the deck stairs in her stiletto boots to get in the Jeep and head out. She can’t get the Jeep to start because the distributor is damp and it doesn’t like to start when it’s damp…wonderful!! Grr! So she walks over to the Monte Carlo that is parked in the bushes and go figure, it won’t start either!
She keeps cranking the Monte Carlo and it finally fires up, yay! But when she tries to pull it out, she feels the tires spinning and back end sliding around…she’s stuck in the mud. 🙁 She does have some good rocking going but that spot is slick because it’s an uphill battle and a big hump to get over.