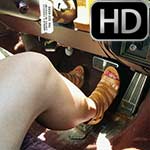 She’s standing in the driveway as you come walking towards her. “You ready?” she asks and starts walking to the Cadillac in those sexy wedge sandals. She’s wearing some super short cut-off shorts that reveal every inch of those killer legs! She gets in the Caddy, pumps it and cranks it a few times before it fires up. Vroom vroom!!
She drives down the road because she has to swap cars. She needs the Camaro for a custom, so she pulls up behind it, gets in the Camaro and gets it started. She backs it up carefully and drives it to the end of the street to warm it up some. She pops it into ‘Neutral’ while driving to give it some revs. She loves the sound that engine makes!!