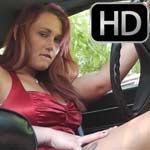 Some sweet sweet revving by Dirty Diana in the Coronet.  She’s wearing her drop dead sexy red dress paired with some patent stiletto peep toe shoes.  She will bring you to your knees with the looks she gives the camera throughout this clip.