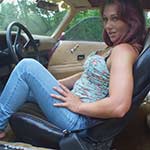 A little short-n-sweet clip of Dirty Diana revving the Camaro.  She slips her boots off and as she’s doing so, the car stalls.  It takes her a few tries to get it fired up and then she does some sexy revving in skin-tight jeans and black-tipped toenails.