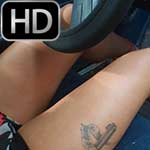 One thought on “Dirty Diana Revving the Monte & Teasing You”