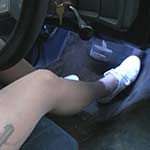 Dirty Diana Stuck in the Mud in Pantyhose & Keds

When it rains, the two places where we park cars on the side of our house get really really slick!  For a while, you folks have seen the issues girls have backing up a car that is parked in front of the bushes.  It makes for great video to watch them struggle to back up.  This spot though is different since we usually back the car into it.  It’s a slight dip, so for a rear wheel drive car, to push the heaviest part of the car up the incline and over the lip of the driveway usually just breaks the tires loose.  This stuck saga started with Rockell Starbux and Dirty Diana is now picking up where she left off.  The Monte Carlo loves to also conk out when the girls get a good run going.  Feathering the gas is the proper way to do it but hey, if they did things ‘properly’ we wouldn’t have much to watch, now would we? 🙂