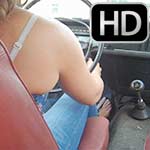 Finishing their last drink after the concert, the girls hang out in the now empty parking lot and chit-chat.  They pack up their junk and pile into the Volvo to leave and continue the fun at the house.  Diana hops behind the wheel and they quickly find out they may not be leaving after all.  She cranks the car multiple times and it doesn’t seem to want to start.  There’s only a grounds keeper and a car or two left, so they either need to get their car running quickly or find someone to help them.  Finally, after quite some time, Diana gets the car started and backs up out of the parking spot.  But she stalls it when trying to go and it’s flooded again…damn!

***Disclaimer:  There were no alcoholic beverages consumed before driving.  Alcohol consumption was simulated.***