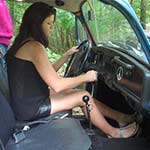 Sometimes it takes teamwork to get these cars started.  Elizabeth and Jane get to it in the Bug and after they get it running, they swap out with each other so both can get some seat-time revving it.

One thought on “Elizabeth & Jane Crank & Rev the Bug”