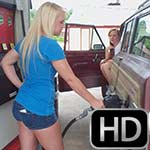 Ellie Mae is pumping gas into the Jeep as Queen Red sits in the drivers seat, talking to her.  The gas tank is full and Queen Red climbs across to the passenger seat as Ellie Mae slips back behind the wheel.  She goes to start the Jeep and it doesn’t start right away.  She pumps pumps pumps that gas pedal and tries again…no luck.  She keeps at it as Queen Red watches and finally tells her to “Don’t do that!”, in regards to how Ellie is pumping the gas.  As they talk about whether or not it’s enough gas, a vehicle slowly drives past with some little dudes in it checking the girls out.  You can tell the girls aren’t interested as they laugh and are like, “Awkward!”
They swap seats, Queen Red gets it started right away and they head back to the house.  While turning the Jeep around, Queen Red has a few stalling issues.  She romps on it when she gets it started and finally, their ‘quick’ gas trip is over!